SSL is a tricky beast, which isn't overly well understood by most developers. The common mis-conception (or partial understanding) is that it's about encryption: hiding the content as it passes from my device to the server and back.

But thats only half the story. One of the main features of SSL [1] is trust.

For an SSL connection to be setup, an encryption key needs to be sent from the server to the client. This is where the well known public/private key pair comes in - the client creates a key, encrypts it with the servers public key (part of the certificate data which is sent from the server), and the server can decrypt it and use it. After that, every thing is encrypted with a symmetric protocol like AES, DES etc.

But to do this, both parties must trust each other, either directly, or via a proxy relationship. This is where certificates and certificate chains come in.

If you open an HTTPS site in your browser, or use a tool like openssl s_client, you can see the chain 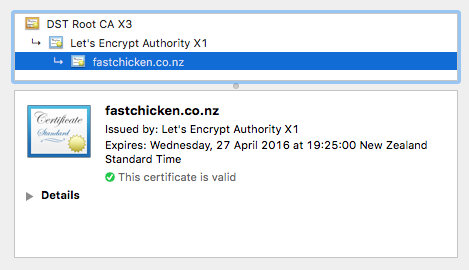 So, given the chain above, my certificate is presented as the one to trust, but is validated by being signed by the Let's Encrypt intermediate, which is signed by the DST Root CA X3 Root, which is already in Chrome. The chain is similar for other websites such as banks:

In this case, this banks certificate is a "Class 3 EV" certificate. This doesn't provide any extra protection during communication, but it's very difficult to get these - you have to go to some fairly great lengths before they are issued, as the CA needs to verify who you are to a very high degree.

As of March 2017, Google have announced that they will no longer trust Symantec certs, so pinning to the EV, in this case, will cause issues, 'cos it's likely to be changed in 12 months. Idea is still good, just pick a more trustworthy CA and plan for even the intermediate to be revoked.

Now, what happens when the browser can't find a pre-trusted root certificate? You get an error message like this: 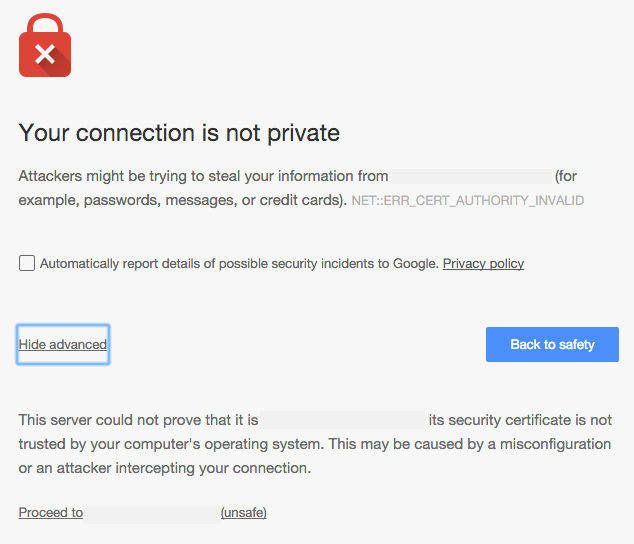 This doesn't mean that your communication is unencrypted - just that no chain of trust could be established, so the browser can't tell who it's talking to. It might be the server (most likely), but it could be the NSA for all it knows. Hence the warning.

Side note: You can do all of this with self-signed certificates, tho you'd need to include your CA Root certificate in your app, and make the network stack trust it. Or just pin to some part of the chain and ignore any errors around not trusting the chain. However, with the advent of Let's Encrypt, there is very little reason to self-sign anymore. They are just as secure, however, if setup correctly.

One of the other, not well used features of SSL is client certificates. All the verification above is about the server proving to the client who it is. Client Certificates do it the other way: the client provides a signed certificate, with a similar chain of trust, which the server can verify. This can be used in place of a username/password login, or just as an extra level of checking. Management of the certificates can be problematic across browsers, so it's not used a lot. More info here, tho to be honest, there isn't much out there on how to do it.

Man in the Middle attacks are still possible, even with certificates and chains of trust: you could be connecting via a proxy (cafe, hotel, place of work) which intercepts all your HTTP(S) traffic, acting as the server so your browser thinks it's talking to the server, but the proxy is talking to the server on your behalf - while able to see all the content as it goes past (and possibly change it).

In most cases, this information is the public key used to generate the certificate, which is part of the certificate. This key is used to encrypt and send data back to the server, which has the private key and can decrypt it. As this is a fairly large piece of data (2048 bits usually), it's normally stored as a sha1 or sha256 hash, for quick string comparison.

To do a certificate pinning check, you need to do the following steps when the client connects to the server:

One of the other considerations is WHAT to pin to. In the screen shot above, you have a choice of three certificates: the server's certificate, the intermediate, or the root, but there may be more levels. Each has it's own up and down sides:

Note that if your CA is compromised, and has to regenerate the intermediate, this will also invalidate your server certificate, so there is the same risk there as the case where your own certificate is compromised.

So, the general rule is:

The OWASP page on pinning has some more info on this.

So, in short, the parts of SSL are:

So, how do we do this on iOS? If you are using a library like AlamoFire or AFNetworking, it's usually baked into the library. OkHttp does it on Android, and HttpClient should support it out of the box on .NET/Xamarin using ServicePointManager.

But if you're using the built in iOS stuff - NSURLConnection, NSURLSession - you'll need to do it somewhat manually. The steps are something like:

However, I've written a Swift library (class) which does exactly this. It's based on AlamoFire and AFNetworking, but extracts out just the certificate pinning bits, and it's quite easy to use:

Full documentation is on the GitHub site. Happy pinning!