I'm officially (f)unemployed this week - I finished up at ANZ last week, and I start at Pushpay on monday. Pushpay has been on my list of places (and people) I want to work since they started (and I got back from the UK), which is awesome. I'm very much looking forward to it.

I can't remember the last time I had any time between jobs, aside from moving countries. It's nice having a week off and not thinking about work at all.... or rather, not having to care about it, even if I am thinking about it.

Milo definitely approves, tho it's kind of hard to type on the laptop when my lap is taken. 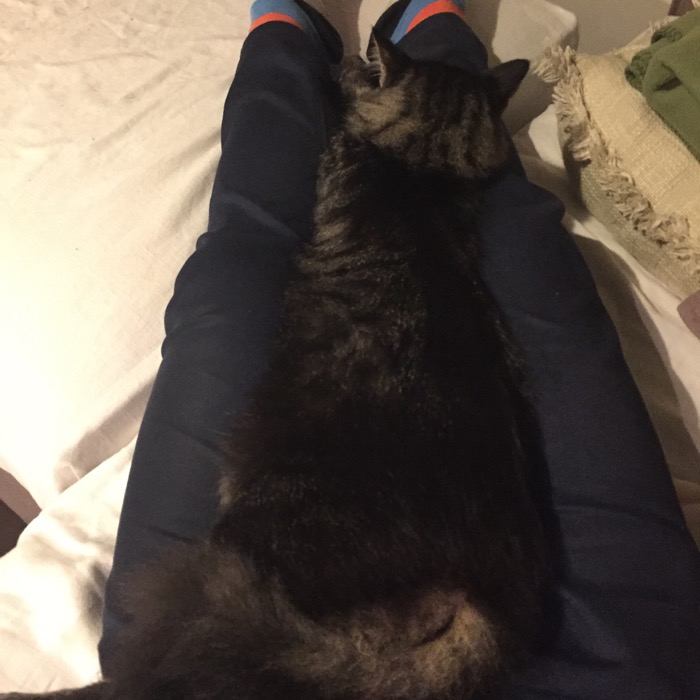 It's not been an idle week tho. So far I've helped out at the local SPCA for a morning, moving beds and rubbish around, been for a swim or 2, and updated the Waiheke Mountain Bikes trails page, which "sadly" required a bit of a ride. Plus the usual gym stuff, and I've been used as a warm sleeping spot on a few occasions. It's been fun, and those Last Week Tonight episodes are not going to watch themselves.

I've also had a brief play with HealthKit, customising the default Apple sample app to also include Body Fat percentage recording. Nothing overly flash, but it's a good way to find out how easy it is to work with HK data. Just spin up a HKHealthStore, request permission with requestAuthorizationToShareTypes:readTypes:completion:, and then read and write the data.

HealthKit looks like it's fairly complete, tho some of the units are a bit odd - eg, no kilograms for weight. But you can just call HKUnit *weightUnit = [HKUnit unitFromString:@"kg"]; to get it, and I suspect there is a "give me the unit that the user has specified", as the built in Health app has kg set for me.

The Apple sample is here, tho I suspect you need a Developer Center login to get to it.

Apple also have a useful Homekit demo which is great for both setting up your Homekit network, or just working out how it works - I've talked about it before here.

AppleTV apps are another thing I've been thinking about (not least because Pushpay have AppleTVs - and Chromeboxes - in every meeting room). The nice folk at Martian Craft have a good post up on how to pair the AppleTV remote to your Mac, so you can use it with the Simulator. Could be useful as a clicker for slides, too, being the new Mac's don't have IR ports.

From the "I wish I saw this before" files: External Views. I think I saw this when it came out, but I could have used it in so many places... I'll jut have to make some new places to use it....

The stuff coming out of Build is interesting. Bash on Windows (well, a full Linux subsystem on Windows, not the same thing). Lets see if it gets beyond the "thats a nice tech demo" phase....