I've been doing a bit of work on Nearest Bus recently, mostly as it's my simplest and most popular (in terms of users) app.

I decided on a full rewrite, as the app is now quite old and bit creaky, plus in it's current state, I'm not using it on a daily basis, as I don't live in London anymore.

So, it's about ready to beta test. More techie info below, but if you live in London (UK) or Auckland (NZ) - it now works in BOTH cities! - and want to try it out for me, fill this form out and go grab the TestFlight app from Apple and I'll add you into the beta. (does it still need to be said that email addresses will only be used for this beta? Really?) 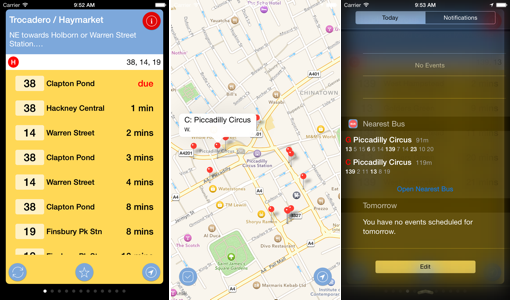 The main changes are:

From a technical standpoint, the app has gone from code-only layout, to using storyboards (which I'm mostly enjoying using). That reduced the codebase by maybe 50%, not to mention made it a lot quicker to write. The architecture of the app has changed to fall more inline with what I think a modern app should be - decoupling the data source from the UI, message passing and dependancy injection allowing for communication between the "layers", that kind of thing. To put it mildly, the old app was a mess, written in a hurry. Things have moved on in 3 years.

I plan to blog about it later, once the app is out.

Anyway, if you want to help out (not a requirement, even if you sign up), please do! Thanks!