I've had various apps in the AppStore for a while now - 3.5 years for mobileAgent, and over 4 for my first public app, London Bike App. Support has always been something I've prided myself in doing - if I have an issue with an app, I like to be able to get hold of the author and try to fix it, and I expect to provide that to my users.

Initially I was just using a combination of email, GetSatisfaction, FogBugz and various support pages on the website. That worked ok, but sometimes it was hard keeping track of who was emailing, when I'd talked to them before, and making sure that I saw and reacted to the emails. (Luckily I don't have a huge support volume, but I could see how a popular app could easily get out of hand)

Recently, my friends Phil Cockfield and Tim Haines released the beta of their new tool, Respondly, and they asked if I'd give it a go and give them some feedback.

Like any good idea, Respondly came out of them scratching their own itch: Tim created FavStar and he and Carter Dotson were dealing with the support for that.

At the time, it was twitter-only, and most of my support comes in via email, so it wasn't too much use - but I loved the idea and the interface. A while later, they added email support, and I moved all my support emails over from my company mail account into Respondly. I've not looked back, and I don't think I'd want to do app support any other way now. 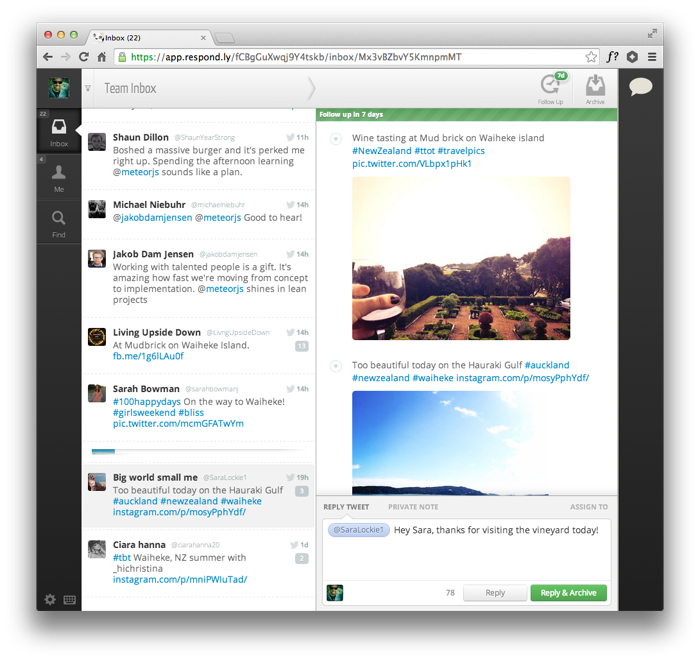 The basic interface of Respondly is a normal email-style inbox. You have the team inbox, with a flow of messages on the left and details on the right. You can also view things assigned to you (in the "me" tab) or search anything, including all the tweets that the system stores.

The easiest way is to reply inline, but you can also add a private note which can only be seen by other members of your team - nice for leaving a note before you go away as to where a support item is at.

To be honest, I'm only using a tiny fraction of what Respondly can do - I'm just one person, so I don't need the team-focused "assign to team member" type functions, and I don't use twitter for support, so the threading of twitter conversations (for each team member) isn't something I use either.

However, just for the email side of it, it's nearly perfect. I'd love to see:

So, if you have apps in any stores, and a support load you need to deal with, especially if you have a team of people who have to handle it, Respondly is a fantastic tool for this - simple, fast, to the point.

Other places have also written about Respondly recently, too: