Meat is a much debated topic. For every meat-a-holic, there is at least one vegan, vegetarian or some other -atarian. Eating it - or not eating is - so so core to our human existence that everyone has an opinion. 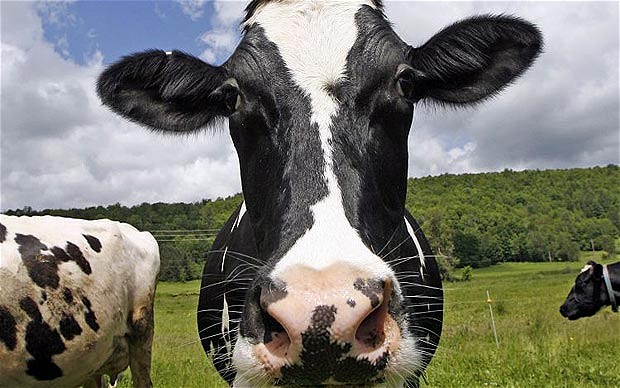 I never used to eat a huge amount of meat. When I was growing up, it was fairly expensive, given what my parents earned, and after I left home, I was mostly a consumer of fish and chicken as thats all that Leonie would eat. It wasn't until recently that I got a real taste for red meat, and more recently, I've been trying to eat in a Paleo manner, which my body is loving so far.

Protein, and especially red meat, is now something I enjoy very much - both the taste of it, and how it affects my body. Having a protean-heavy breakfast (in my case, scrambled egg(whites)) is the only way I've managed to keep satiated for a long period. Carbs just don't cut it, and looking back, they never have. I'd either drastically overeat (6 slices of toast for breakfast?) or I'd be hungry inside of 2 hours, or often, both. [1]

Back when I was travelling to the US for work often, I read Eric Schlosser's book Fast Food Nation. It scared the hell out of me - the US food production system couldn't be THAT broken, could it?

Clearly, it could, and still is. I was travelling to Wisconsin - "America's Dairy Land" - and I never saw a single cow. Most restaurants proudly proclaimed "100% USDA beef", but Schlosser's book kind of killed that as a quality mark. Even worse, when we were driving back up the I5 from Los Angeles to San Francisco last October, we drove past a few feed lots. That's not something I'd ever seen in my life, and the smell alone was enough.

For me, cows eat grass in a paddock, not corn (and whatever else) in a mud and shit bath.

On Medium, I got to reading The Meat Seeker's Mission. In it, the author asks all of the restaurants in her area - The Mission district of San Francisco, not by any means a backwater - where they get their meat from. The results were astonishing

One-third of the over 100 restaurants we asked refused to tell us where they get their meat. Most of the other two-thirds did so reluctantly and with suspicion. To compound the problem, restaurants that tout “good” meat are too often misleading people, intentionally or not.

This is the exact opposite of places we'd eat at in the UK or New Zealand: hyperlocal is becoming very popular and common. The 25 Mile is a shining example, but by no means the only one we came across - even small local pubs proudly tell the diner where their food is sourced from. It's not every place, for sure, but more often than not.[3]

The Medium article got me thinking back to a conversation I had with my bother in law. He's a dairy farmer, and by most measures a good and successful one. He's not organic, but he also only gives animals drugs - usually antibiotics - when they need it, just like you do with people. He doesn't see value in mass-prescribing, but also cares too much for his cows to see one suffer from a preventable illness for the sake of being "organic".

I was even more surprised when he told me that if a cow has something wrong - Mastitus for example - and was being given antibiotics to fix it, that cow was off limits for milking. It had to be milked, sure, but the milk was dumped. If it got into the supply which was going to the milk company, he could be fined anything up to the cost of the entire tanker trucks load, as well as the cost of cleaning the tanker - something in the range of $30k or more. All the tankers are tested, too, so there was very little chance of him "sneaking it in".

This made a lot of things in the Paleo literature[2] make sense. Tim Ferris' mantra of always eating grass-fed meat makes a lot more sense - but also why I couldn't get it here or in the UK: there is no need to advertise that it's grass fed if all (or close to all) of it is.[3]

So if you are eating meat, especially in the US, mind where you get it from. Read the Medium article and ask your restaurant where they get it from. If you are buying it, look out for companies like Mindful Meats (and listen to Claire's Do Lecture from DO USA 2013). What goes in your mouth affects your body in such a fundamental way, you owe it to yourself to know where it's come from.

[1]: To keep it in perspective, 6 slices of bread is around 900cal, plus butter/marmite/jam/whatever, and as much egg+whites as I can eat is around 300. And the bread mostly breaks down into sugar.

[3]: On the flip side, is everything roses and unicorns here? I seriously doubt it. But it appears to be a long way off the state of the US food chain.