On Monday, Apple approved the latest version of mobileAgent - mobileAgent 2.0. As usual, it's available on the App Store

Version 2 isn't a full rewrite. It's a reworking and a bit of a rethinking of the same, nearly-3-year-old app, with a fresh coat of paint. 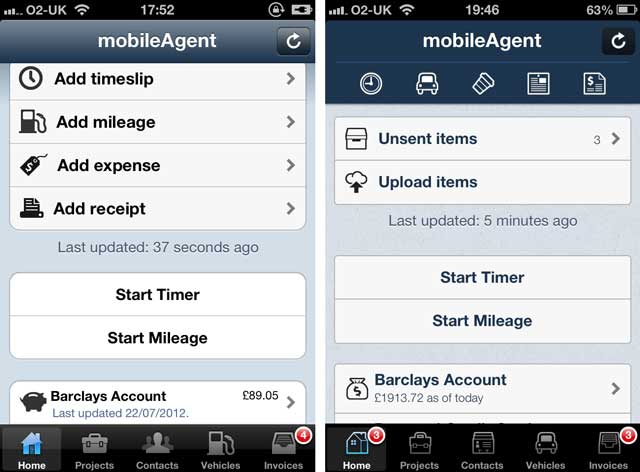 The only real new feature, outside of cleaning things up, is Bills - you can record a bill as it comes in, including recurring bills. There are a few smaller bits in there tho

A major - and I hope, not confusing - change is in the main action buttons on the front page. They were taking up a lot of space without any real reason, and now they are in a nice row along the top:

As part of that, I revisited every screen, removing a few little used (and little known) features, and made everything consistent - same font (Helvetica Neue, which is also the one used eveywhere in iOS7), same colours, icons from the same set, same styles. Consistency was a #1 priority[1]. I have also comissioned a new icon, which I hope will look a lot better on your precious homescreen real estate.

After doing this, there is still one major area which the app doesn't do. I am planning on doing this (after putting it off for ages), tho it may be a small in-app purchase. Stay tuned - I'd rather not pre-announce it incase I don't get time to finish it before we head back to New Zealand!

For anyone wanting some more technical details on the update - theming, customising monotouch.dialog and the like, I have a few posts coming up on that.