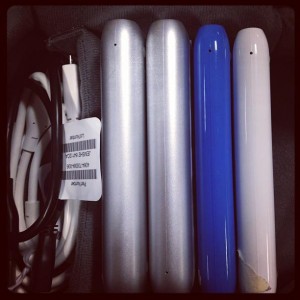 Amazon dropped off a new backup drive today, so I thought I'd share my backup "strategy", because you should be backing up, kinda like you should be flossing your teeth. These days, especially if you have a Mac, it's so easy that there is no excuse for not doing it.

TL;DR: FFS, make sure you backup, and test your backups from time to time. Use Time Machine, get an external drive, or use SuperDuper. It's easy and cheap.

This is all from a Mac point of view, because that is what we have. Most of this can be done on Windows too. I just don't know how.

For most people, what we do is overkill, but some of it is applicable to everyone. Backups are broken into three distinct strategies and purposes.

The first is a daily backup. This covers us for things like "oh crap I deleted that file" right up to disk crashes and theft. For this, we use Time Machine, which is built into Mac OSX. All you need to do is get an external drive, plug it in at least SOME of the time, and tell Time Machine to use it. Not hard - just plug it in before you go to bed, or before you leave to go to work. If you have a desktop machine, leave it plugged in all the time.

If you need a wireless router, the Time Capsule is also useful, as it can be used as an external, network connected drive for Time Machine as well as being a nice 802.11N router. This is what we have - a 1TB Time Capsule, which stores the backups of both of our laptops, usually hourly.

If you don't think Time Machine is for you, SuperDuper is another option, which does a complete clone of your hard drive, but you have to remember to do it (it can be scheduled too).

Time Machine is like having something automatically floss for you. If you have only a very small amount of data, a service like Dropbox is also good for smaller files which change often, eg if you are working on a book.

If you do nothing else reading this, and you don't backup already, instigate a daily backup routine using an external drive, eg a WD Passport 500GB. It's cheap, and it'll most likely save your backside.

The second level is offsite backups. You can go to all sorts of levels with this, but I keep 3 (now 4) external drives in my desk drawer. I take them home 2-3x a month, and update them, which takes about 20 mins for the laptops, and about an hour for the Drobo (more on that later). This covers us for the house-burning-down situation, and also someone breaking in and cleaning everything out. Will will lose some stuff, but it'll be kept to a minimum, and the effort in doing it is minimal. If you go and have dinner with your parents every 2 weeks, it's an ideal time to take an external drive over and store it there. Our other option is a fireproof safe or a security deposit box.

For this, I have three things to back up: 2 laptops (500GB each), and the Drobo (NAS / big networked hard drive) which has all of Leonie's photos on it, and a load of other important stuff. The two laptops are easy: SuperDuper. Once it's done the first time, an update takes about 20 mins. The drobo is a little harder, and I've written a few rsync scripts to mirror the contents of various folders and shares on the drobo onto the 1TB drive. (I had to get a second 1TB drive as Leonie insists on taking photos....). It's not hard to do, and there are tools out there to automate it (or ask, I'm happy to share them).

The other thing with these drives: they are encrypted. Mac OSX Lion (10.7) comes with FileVault2, which has a full-disk encryption option. This means you can reformat the drive with encryption turned on, and everything on the disk is encrypted. It can be read by any Lion machine, if the password is entered. But without the password, on any machine, it's just meaningless random noise. Definitely worth doing if you leave the drives somewhere where you don't have the key (eg my desk drawer, tho I have one now). Sadly, it's not supported pre-Lion, but something like TrueCrypt is. FileVault is just a bit easier to use.

NOTE: if you format a drive to use FileVault, you WILL lose whats on it, so make sure you have it somewhere else. Or do it on a new, clean drive.

Another option is to use an external "cloud" backup service for this, one like Carbonite. Personally, while I trust these services (most encrypt the data before it leaves your machine), I don't like the delay and resource usage of pushing around 2TB of data over a 1Mbps internet connection. Sure, once it's done the first time, it'll be quicker, but thats going to take 4-6 months to upload. But if it works for you, it's a good option, and also transparent like Time Machine.

The last level we have is not really backup, it's more redundancy. We have a DROBO FS, which is a 5 disk NAS box, with around 8TB of raw disk in it (4x 2TB, one bay free). I have it setup for 2 disk redundancy, which means 2 disks can die at the same time, without losing any data. We "only" end up with about 3.9TB of space on there, but it's an easy trade off.

The DROBO is used as a smart file store. It has our media (TV and movies), documents, and all of Leonie's photos on it. It's easy to setup and use, and very easy to handle if a disk fails. If we run out of disk space, I can upgrade the 4x 2TB drives in it with up to 5x 4TB drive, which means we'd have 20TB of space, and around 10TB usable, all without even turning the device off.

To be honest, while I'm happy with it, the DROBO option is total overkill for most people, possibly including us. I got it because Leonie was running out of internal drive space, we wanted as close to zero chance of data loss as possible, and also wanted something which was shared between us. There are definitely cheaper and faster options - in hindsight, I might have gone for one of the smaller G-RAID devices, which are USB/Firewire drives which have a high level of redundancy built in (2 drives, mirrored), and connected it as a shared drive on the Mac Mini. But we have the DROBO now, and it works well. Even the base DROBO (which is USB/Firewire) is a lot cheaper, but I wanted something network-connected.

The bottom line: If you are not backing up, stop now and order an external drive and start doing it. There is no reason not to. If you are using Windows, there are equivalents to all of this, and even the built in Windows backup stuff is good enough, tho not quite as convenient as Time Machine.

One point of note: Apple sells most of the stuff I've mentioned here, but they are usually around 40% less at Amazon. Unless you are buying a Mac, iPad/iPhone or other Apple-branded device, NEVER EVER buy hardware from the Apple Store.