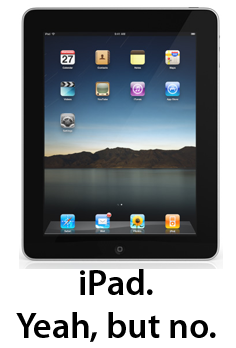 I finally got my hands on an iPad for a little while, after fighting a few other people off them at the Regent St Apple Store. Now, I realise I'm not a normal user. Not in the slightest. We don't have a couch. I don't commute. We usually watch media together, not separately. We don't have the center-of-the-living-room TV. We are not abnormal, but we are not normal, either. But by the same token, iTunes is the center of our media world. We buy all our content thru it, it has all our music, we take that content places on iPhones.

But the iPad is just not for me. Yet. Here's why.

Everyone else has done the hardware etc to death, so I'm not going to bother, but here's the bits I liked:

So here's my argument for not getting one (odd that it's an argument against, not a justification for, but anyway)

I have a fairly small set of functions I need a computer for. Currently, I have 3 computers. I have a 15" Macbook Pro (i5, 8GB, 500GB disk) which I use for day to day stuff. I have a Mac Mini which is used as a headless server for VM's and music (2.0ghz C2D, 8GB, 320GB) and an aging iPhone 3G, which will be replaced with a 4G or whatever they call it when it comes out sans-contract.

What's noticeable in it's absence is a Netbook - hackintosh or otherwise. I've looked at them, but never felt compelled to get one.

What I use computers for - because lets face it, all of these (Macbook Pro, Mini, iPhone, iPad) are real computers.

I spend most of my day - ie, the bits I get paid for - in VMWare or something similar, usually in 2-4 Windows 2008 Server VM's over 2 machines. I have 8GB in both my machines, and I use it all up often. An iPad is never going to replace this, not until it can run a 4GB (ram), dual-core VM at top speed, and unlike Mr Gemmell, I'm not likely to use it as a document lookup device.

I spend a lot of my down time watching or listening to media (well, some of it anyway). All of our media comes from a few sources: iTunes, iPlayer (downloaded), or our shared iTunes library on the Mac Mini. An iPad could come into play here, however a 8" screen, compared to a 20" monitor, isn't going to cut it for 2 (or more) people to watch. It would be good if I was traveling a lot, but I'm not anymore. The Macbook Pro serves for both the tethered (at home) use, and is portable enough to be taken on holiday, on a plane, on work trips etc. Where the Macbook doesn't work, the iPhone covers that space well enough, even for 2 people watching a movie on a plane.

The rest of my time, I spend reading blogs, doing email, twitter etc. This is where the iPad could really come into it's own, except I have the iPhone for that if I'm not at my desk, and the Macbook if I am (or if I can be bothered to take it with me). I dont have an issue reading blogs/twitter/email on the small screen, thanks to Twitter iPhone, Reeder and Byline, and the Guardian app. I can type very well on the iPhone, too (and I imagine I could on the iPad, too, tho I didn't try). If I didn't have the iPhone, I could definitely see an iPad fitting in there, but really, I use the iPhone for this 2-3 times a week, usually on the weekend, tho it gets a lot of use for other things - uses which the iPad wouldn't fit for (again with the "it doesn't fit into my pocket"). I tend not to sit on the couch and surf, not least because we dont have a couch.

(ok, there is also "other" time in my life, but I'm only talking about time I spend using a computing device)

Could I use it when we are on holiday? Of course, but the iPhone also covers this well enough, and despite what Leonie says, I do like to disconnect - even if not compleatly - when I'm on holiday, so a device which is designed to be connected all the time is not going to be a good fit.

Could I use it for my commute? Well, 7 months ago I could have, but my commute it from the bedroom via the coffee machine and shower, to the lounge. So no.

So while it's a lovely piece of hardware, it's not for me. Pretty much all of the use cases Apple presents, and I can think of, I dont do, or if I do, I have other hardware which covers it. If I had a long commute - which I had, from East London to West London, 1 hour each way, each day, before I left the BBC - then I defiantly could. If I didn't have an iPhone (or I was replacing it) and only had a desktop machine, I could see getting one being a good thing. If I travelled a lot for work, I could see myself getting one. If I went to a lot of meetings, I could see myself getting one.

But I dont have or do any of those. Not any more.

I could argue that if I was writing apps for it, I'd get one, and if/when I do, I most likely will. There is a good chance this will happen before Christmas, too. But until then, my uses for portable technology are covered, and covered very, very well.